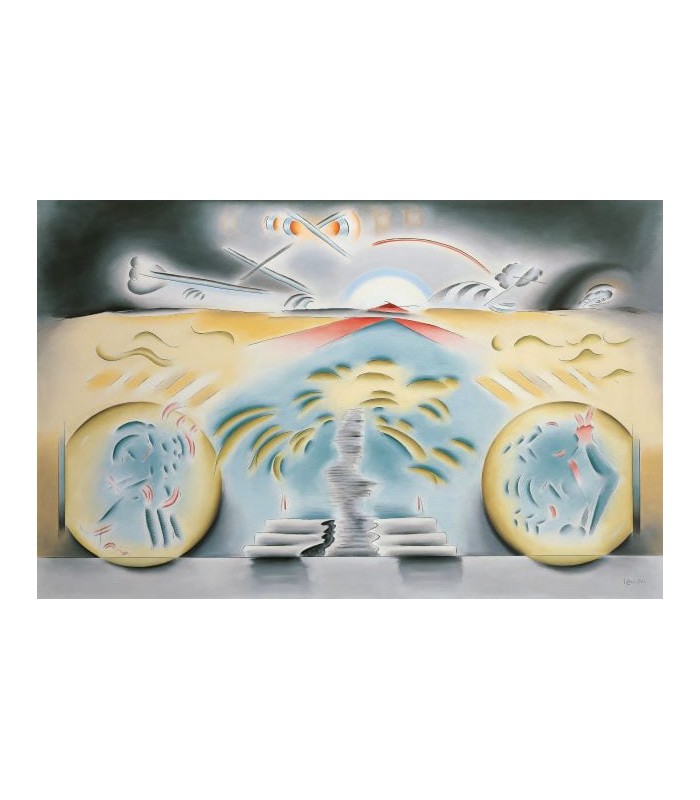 The planet Gio is also a place of expression of chiaroscuro aspects not allowed by the monochord quiet of the high planet Arthur, where hostilities are absent. Among these (disvalues) in addition to war there is terrorism, which involves only entities of low evolution, such as certain elements of nature, animals (moderately) and plants. The picture intends to illustrate these aspects of strong contrast, with reference to the plant world. In it the warrior plants (represented with functional forms) are easily identifiable within the globes that act as watchtowers, where they appear placed in orderly formations, ready for action as disciplined fighters. Between the globes there is a path called terrorist because it is broken down and devastated corridor of access to the area beyond the horizon, where they stand out against the sky, among bruises, disturbing threatening figures. The reasons for the dispute are not known. Intimidation and irrational will to harm without discrimination (extraneous to common sense and any idea of progress) dominate, here painted with condescending irony as expressions of implicit immaturity.

THE REPRESENTED WORLDS The paintings recreate moments of life in the landscape of the (imaginary) planets Giò and Artù, planets both spiritually more evolved than Earth, characterized by a more "subtle" material aspect than ours, by a less heavy physical material.
Such spirituality not only has to do with the figuration of humanoid souls but rather includes elements of nature, trees, volcanoes, islands, which are a clear indication of autonomous intelligence.

The planet Giò, in its spiritual evolution is a step toward the very heightened planet Artù, but it is not an evil planet when compared to the good planet Artù. Its lower evolution allows me to adapt it to specifically "chiaroscuro" themes like pollution (which is quickly remedied with refrigerated containers), industrial districts (sufficiently ecological), etc. There are no wars. The number 1 painting, War, is set in a planet called "of earth" (reminiscent of our planet) never mentioned again. Situations with strong contrasts are found only in entities of lower evolution: elements of nature, mountains, islands, plants. In Giò, such entities as we know them immersed in the dream of matter, or (perhaps) in elementary psyche, finally awaken in the conscience and, at this stage of evolution can also lead to hostile behavior projecting up to war and terrorism, but considered by their implicit immaturity with distant irony.
The planet Arthur, because of its high evolution, does not illustrate somewhat disturbing issues but rather evolutionary aspects involved in a somewhat necessarily monotone expansion. There all of nature, consistent with the greater spiritual evolution of its "residents", participates in its events expressing sensitivity and empathy.
Both planets are placed beyond the confines of our reality, in a dimension that is a place of survival and destination after physical failure; the place to continue the evolutionary experience according to the esotericism of many religions, moreover evident in Christianity: "In my Father's house there are many abodes".
In that sense we can speak of the eschatological character of this painting.

Reviews
No comments
16 other products in the same category:
Add to cart
Painting

THE INVADERS: A QUIET DAY

THE FILLET OF BEEF